We are very proud and honored that our new Catalina 425 was named Cruising World Magazine’s “Domestic Boat of the Year”.

Not every naval architect gets the chance to take a second swing at a popular design a couple of decades after the splash of the original. But that is precisely the opportunity that presented itself to Catalina Yachts designer Gerry Douglas with his Catalina 425. The company’s original 42-footer debuted 23 years ago, and before all was said and done, Catalina produced more than 1,000 units of the highly successful production boat. Now Douglas has taken all he learned in the intervening years and amalgamated that knowledge in the new 425. And he knocked it out of the park . That’s why we’ve awarded the 2017 Domestic Boat of the Year award to the Catalina 425.

“With his history with the previous 42-footer, and the fact that he owned one himself, Douglas had an amazing feedback loop when he tackled the 425,” said judge Tim Murphy. “So he had a great list of things he wanted to change along the way, and boy, I felt this wasn’t like you were aboard a production boat, frankly. It has a very warm-feeling interior, and the fit and finish was emphatically good. With detail after detail, there’s a lot of value in this boat, which comes in at $315,000.”

“It had a higher level of finish than some of the more expensive boats in its category,” noted Ed Sherman. “One of the things Douglas said when discussing his personal design brief was that he wanted to have excellent service access to all the systems. He achieved that goal and did a nice job with it. Everything was easy to get to, labeled properly and quite good in that respect.

“It’s one of the few boats we sailed this year with a shaft drive, compared to saildrives,” he continued. “So it’s more of a traditional cruising boat in that respect. Overall, this is a great redesign. His old 42 had a center-mounted steering pedestal with an abnormally large steering wheel. Now he’s gone to twin wheels. It’s really opened up the cockpit nicely. Behind the scenes, the electrical panel, glasswork and so forth are all super clean.”

“Catalina did an excellent job with this boat,” said Carol Hasse. “There was a concerted focus on safety features. The target market is an experienced sailing couple in their 50s with plans for retirement cruising. This will be an excellent vehicle for that.

“I like the fact that all the lights were LEDs with dimmers,” she added. “It also has some cool, fun lights in the cockpit console that were kind of sweet. There was a beautiful saloon table, really awesome. The opening ports were good. The engine access was great. Overall, I was very impressed.”

So too were Hasse’s fellow panelists, which is why the Catalina 425 took home one of the two major awards for 2017. 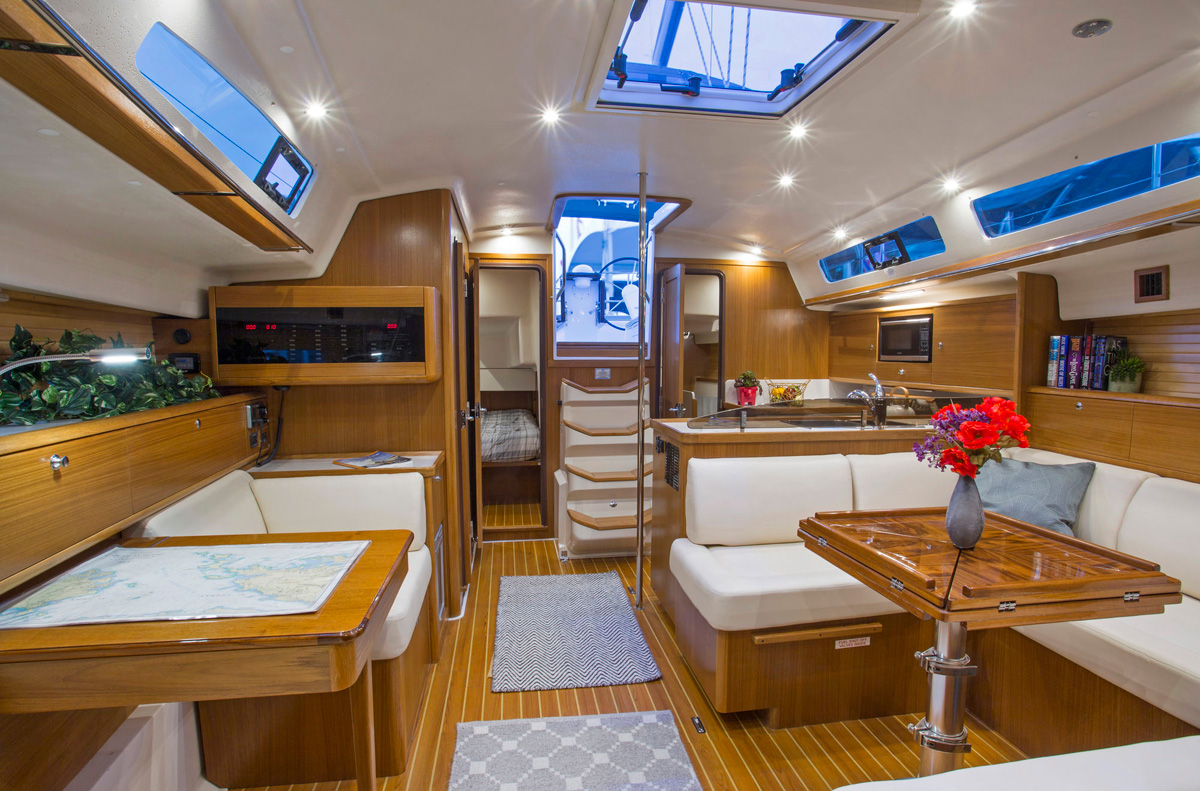